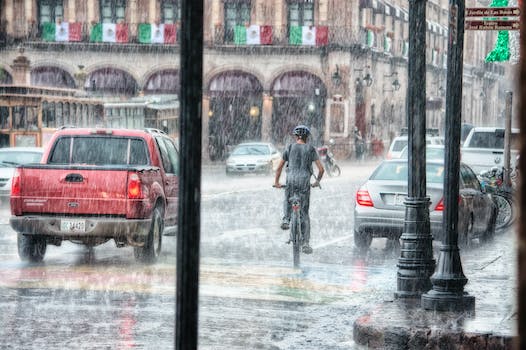 Sometimes I can’t help being a grouch. I guess it is what happens to a person when they get older. They get older, grouchier and grumpier.
The last several weeks I was grouchy about the weather. What else is there to grouch about these days? I would grouch about politics, but it’s a world of craziness. I suppose good people visit Washington, DC, but they don’t stay good for long. Thus, I have given up grouching about politics and politicians and such.
One of the good things about grouching about the weather is it there is nothing you can do about the weather. You may not like the weather. You may want a different type of weather. However, there’s actually nothing you can do to alter the weather on the outside.
Over time, I’ve realized that if I wanted to bet on which day it was going to rain, it would be the day I wash my car. When I am out there washing my car, Mother Nature is looking down on me grinning one of her sarcastic grins, knowing that she is going to send rain my way daily.
I like grouching about the weather. After all, you need to grouch about something and I would rather grouch about something that I had nothing whatsoever to do with then something that I could change.
Another day I started downtown and the sky was bright and sunny. Twenty minutes later, it had been raining cats and dogs.
Three weeks ago at the church, we purchased a brand-new lawnmower. We have never been able to use it yet so we don’t know if it actually works or not.
Considering the rain condition, we are in I often wonder about how Noah felt about the rain in his day. He built an ark and there wasn’t a drop of rain to be found. He told everybody that it was going to rain; nobody had ever seen rain before and did not know what he was talking about.
For 100 years, Noah was building his ark and telling people that the rain was coming soon. They laughed at him and probably he was the first person called The Rainman. They were not laughing so much when the rain actually did come. When I thought it was about over, there was a crackling thunder and the rain came down worse than before.
My wife looked at me and said,”What would you like to go outside for?” Because there’s nothing for me to do outdoors and furthermore, I’m not permitted to do any repair work on the outside by decree of the Dania Beach Wildlife Removal. No matter how bad something is broken, five minutes with me and it will be worse than previously. That is, based on her estimation.
I tried to stay quiet for a few more moments, but lo and behold, out came more grouchiness. I guess a person my age has a lot of grouchy to come out, but there is never a suitable time.
“I’m getting so tired,” I said,”of the rain coming rather than stopping. When will the rain ever stop? I can do with this rain.”
At that moment, my wife came into the room where I was sitting and stared at me for a few minutes. She has those stares that penetrate directly to the soul and back out again. I was afraid to say anything at that moment.
Then, putting both hands on her hips, she said,”What would we do without rain?”
I didn’t know whether this was a rhetorical question or when she was grilling me about our situation. She then turned around and went back into the kitchen to her job. Where on earth would we be if it did not rain as it was supposed to rain?
If it were not for rain, we’d not have the beautiful land we now have. The farmer’s fields would not grow. The gardener’s vegetables would not grow. The florist’s would lose all their flowers. It is important in this world in order for it to rain. Rain has a way of creating everything grow and be healthy. “Sing unto the Lord with thanksgiving; sing praise upon the harp unto our God: Who covereth the heaven with clouds, who prepareth rain for the earth, who maketh grass to grow upon the mountains” (Psalm 147:7-8). You cannot make it rain and you can’t make it stop. However, every rain has a beneficial impact on the world around us.
I cannot control the rain, neither can I control much of the elements in my life but I can have a thankful heart like David, knowing that after the rain the flowers will blossom.